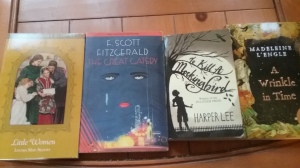 If you’re like me and you love to read and talk about books, then you will want to check out the American Writers Museum (AWM). After a soft opening to the public last spring, AWM is finally beginning to draw more visitors and book fans to its location on Michigan Avenue in downtown Chicago. For anyone visiting Chicago and looking for a literary hangout, AWM may be just the ticket.

I had the opportunity to visit the museum for the first time, thanks to a friend who is a member who invited me as her guest. While she listened to a talk about the life and career of Chicago writer Nelson Algren, I wandered through the exhibits, marveling at the history and literary genius of American writers, such as Algren, children’s author E.B. White, Ernest Hemingway, Richard Wright and F. Scott Fitzgerald, and others.

I particularly enjoyed the temporary exhibit Capturing Stories, which featured the visual works of photojournalist Art Shay who photographed notable authors such as Hemingway, Studs Terkel and Gwendolyn Brooks. Another temporary exhibit featuring the life and career of Laura Ingalls Wilder, who wrote the Little House on the Prairie series, reminded me how much a writer’s personal and family life influences their creative work. It also reminded me that I had read the first book in the series, Little House in the Big Woods when I was in fifth grade.

Permanent exhibits include a chronological presentation of the writing industry and the significant historical events that overlapped it; profiles of Chicago authors and the impact their work has had on our society and the city of Chicago; a children’s author section with a sparse collection; and a collection of games and exercises throughout the museum so test your knowledge of authors and their works. One such game, which could be played with one or two players, displayed a paragraph from a known published work with missing words. Players select a word from a list provided and can earn 25 points if they choose the word that correctly matches the published work.

Another example of the interactive nature of the exhibits is the ongoing survey of visitors about their favorite American authors and favorite published works. On my visit, To Kill a Mockingbird by Harper Lee was the top named book, and Ernest Hemingway and F. Scott Fitzgerald were the top named authors. The list is continually updated based on visitors’ survey responses.

The program calendar also has something for everyone — from gallery talks and children’s story time to conversations with first-time authors and discussion groups. AWM is rather compact in size, taking up the entire space on the second floor. Figure to spend at least two hours navigating the exhibits.

If I have a complaint at all about AWM, it would be the noticeable gaps in the exhibits. For example, the children’s section featured only four authors: Langston Hughes, E.B. White, Louisa May Alcott and Maurice Sendak (author of Where The Wild Things Are). I wondered why other prominent children’s and young adult authors such as Dr. Seuss, Charles M. Schulz, Judy Blume, Carolyn Keene (Nancy Drew mysteries) and R.L. Stine, were not included.

Overall, the American Writers Museum does a pretty good job of collecting, organizing and presenting an interesting array of artifacts and information about the world of writing and literature. While it’s a worthwhile showcase of the best of American writers, there is plenty of room to grow.

Write a scene or short story about a lie. Who is doing the lying, and why? What do they do to cover it up or reveal it?